The ‘Audio/Visual’ night at New River Studios put on by Daisy Dickinson in December at the end of 2016 was already interesting in terms of form, being explicit about the event being of a definite collaborative and multimedia nature. A greater visual emphasis compared to audio is hardly rare within the broadly ‘inter media’ realm of performance this show could be categorized within, or indeed within the growing popularity with which lights and visual effects are greeted in the live music world. What was pleasing about this particular show was how the music seemed to flow freely in response to the visuals rather than the visuals acting as mere accompaniment or sideshow.

Dickinson clearly has a fine eye for collaboration, having worked with 90s post-rock group Seefeel on tour and worked on videos with Perfume Genius and Deerhoof among others. With this particular line-up she bought together three well-seasoned and innovative collaborations, each bringing an improvisational live-ness to the fore. While Dickinson’s tour and video work is obviously of some repute, it was the performative nature of both the visual and audio in each act that made for free flowing and stimulating experiences.

First up were OvO, a collaboration of Bo Ningen drummer Monchan Monna with media artist Noriko Okaku, with their performance of ‘Untitled no 2’. Reeling through old footage of old childhood holiday style film to sparse and spatial cymbals, Okaku slowly vocalises memories in stilted spoken word and the piece gradually fragments and decays into cartoonish glitches and edits from the film, taken along by growing percussiveness such that the visual fragments of childhood begin to dance with themselves and their distortions amid intensifying post-rock noise. Through and from the chaos of Okaku’s visual overloading of memory ablaze in its own fragmentariness, Monna crashes into a frenetic swirl of beats and cymbals to the concluding all white screen left behind by Okaku.

The overall impression the piece leaves is of the growing feedback of a memory retracing itself over and over again to the point of complete distortion such that the original content is subsumed in visual and audio noise. It’s pure frenzy as the mediums ebb and flow in intensifying exchanges of energy. You’re left with the idea that the very act of memorizing is an act of creation and the breadth of Ovo’s audio and visual timbres and intensities serve to show the full palette available for doing it.

Second was Dickinson’s latest collaboration with E-Da Kazuhisa, the drummer for Boredoms and Seefeel. The act is visually intriguing before even starting, with a giant white balloon hanging above Kazuhisa’s drum kit. This planet-like screen has orbited various music and film festivals throughout 2016 and is accompanied with a DVD release featuring many of the images of a drum falling down a rocky river that were on show here.

For this particular performance the ball shimmers between galactic clouds, earthly terrains, volcanic heat, and glacial iciness. The set begins nocturnal and dense, the balloon a particularly luminescent moon, but as the initial sludginess of Kazuhisa’s drumming floats through into a more electronica and jazzy percussive splash, Dickinson’s projections become magmatic and sulphurous, psychedelically cosmological, and thawed with ice. The music and visuals don’t so much flow as spin and expand like the galaxies, but as the performance comes to its close, the aforementioned images of drums rolling down an English countryside rocky stream emanate along with accompanying percussive downpours. 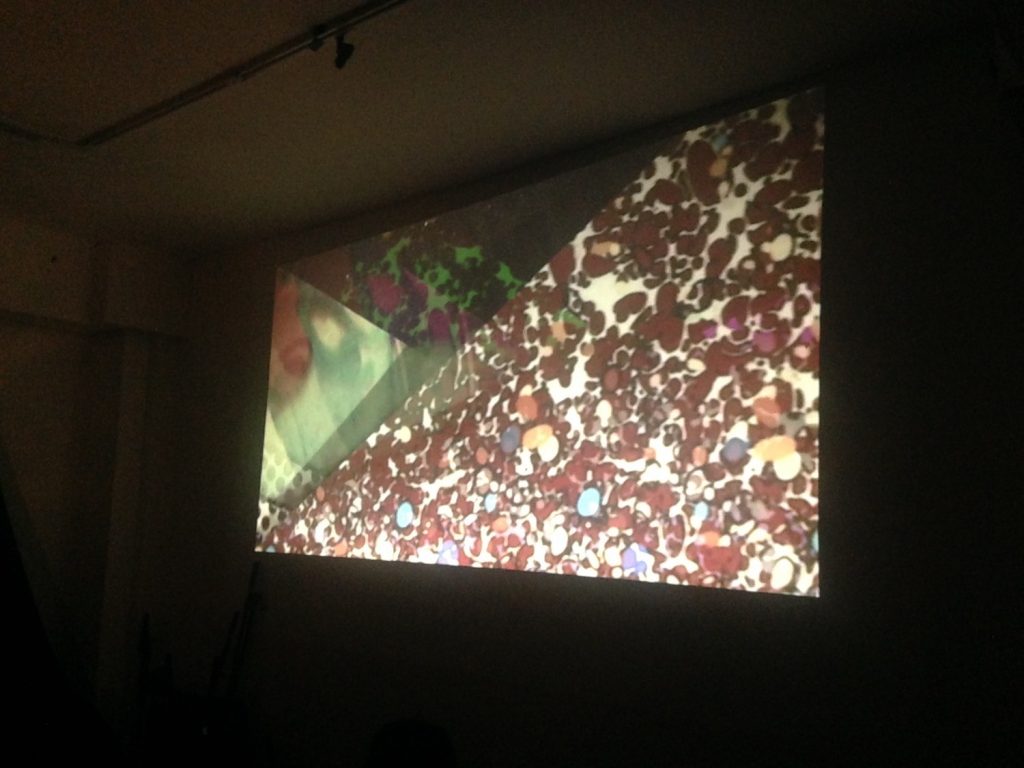 The performance is both elemental and epic, drawing you into its transcendental rhythmic and visual orbit before landing you in the grounded and earthly realm of the physical drum hitting the rocks in the splash of a river, drawing attention to the wonder of the earth and our sensuality on it. Undoubtedly the visual aspect is preeminent here, which is not to say that the audio is submissive, but more to say that its purpose is to accentuate the terrains and cosmologies of the shifting visual globe. Indeed the crescendos, jilts, spaces and crashes of the drumming weave into the visual to elevate and embolden the overall grandiosity of the collaboration.

Concluding the night were Sculpture, a collaboration between producer Dan Hayhurst and animator Reuben Sutherland. With Hayhurst creating Warp style beats and glitches using various tape loops hanging to his side, the closing act also acted as a sort of entrée to the after-party as the audio/visual stage would soon give way to DJs in the bar. Here the focus was again firmly on both the audio and visual aspects as Hayhurst’s Aphex Twin evoking experimentalism proved the perfect accomplice to Sutherland’s circling pop art-y visuals.

Using a turntable to spin collages of comic book style animations and psychedelic patterns, the performance centres on the live camera feed of these circling images and his use of his hands to move and play with them – he was, in a literal sense, DJ-ing the visuals here. The result was an always shifting and mesmerising pattern of visual loops, fragments and gestures that combined with the concurrent audio shifts and patterns being played by Hayhurst to create an overall sense of constant energy and exploration.

The Scultpure collaboration was perhaps the most inherently musical of the night, not just because the music itself was more prominent but because the visual itself was. Sutherland’s visual techniques themselves were clearly mirroring that of his collaborator. The piece didn’t so much create new forms through the combination of medias but rather it embraced the vibrancy of the acid techno aesthetic and intensified it through innovative and playful visual wizardry.

As a whole the night wasn’t so much concerned with making grand points about audio/visual as an art form distinct in itself, but rather it was more impactful as a showcase of the energy and vibrancy that the two mediums can make and inspire in each other. While the visual elements were perhaps more prominent in the OvO and Adrena Adrena collaborations, the line-up succeeded in that in each collaboration the visual elements drew upon the momentums and flows of their musical counterparts to themselves flow musically, giving greater impetus to and elevating the imagery and visual artistry on show.

This site uses Akismet to reduce spam. Learn how your comment data is processed.