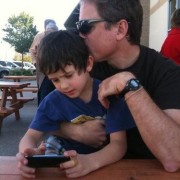 Fred Nolan was born near Jamestown, NY and lived in a half-dozen different cities before graduating high school. This earned him the nickname Six Flags and a fairly loaded accent, which he conceals pretty well by mumbling. He has strummed a guitar and could change a broken string if he had to, but cannot cite any formal musical training. He wrote for The Muse In Music from January 2009 to December 2012. While baroque pop and indie rock are still dear to him, he sometimes grows tired of big beards and accordions. He began writing for Fluid Radio in March 2011.