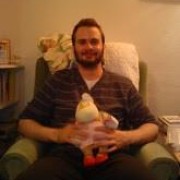 Ambient and Avant Garde drone are two of my deepest musical loves. I produce as Foci's Left, having soundworks released on the Audio Gourmet and Ohmni labels. My debut album "Grumpy Love" was self-released through Bandcamp in May 2013. Favourite artists that are Fluid Radio relevant? Grouper; Steve Roach; Stars Of The Lid; Robin Guthrie and Harold Budd; Bat For Lashes; Sigur Ros. The concepts of "transcendental introspection" and "refractive assuaging", first ever written about by me in the Music context, started out on Fluid Radio. I aim to procreate with oblique and creative angles for everything you will read from me. At the time of writing, I'm 93 articles into being a writer for Fluid Radio - yowza!