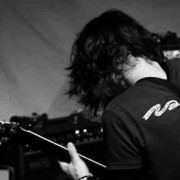 Daniel W J Mackenzie currently lives in Brighton, England. Though he extends to writing, visual art and photography, his main creative concern is producing music. Under his real name and the alias Ekca Liena (as well as in the band Plurals), Daniel has released a sizeable discography, from the abstract and oppressive to the melodic and gentle; as a whole his work his difficult to categorise and so it remains that he finds himself lost on the fringes of marginal music scenes. His writing, mainly in the form of music reviews, has a similar obscure diversity - in the past he has covered various areas including ambient, sound art, heavier rock and metal-rooted orientated events and releases and music in society - tends to retain an honest and casual style.